Graph databases are the new hot thing. Actually not so new. IBM, among others, has been toying with them since the 1960s. In recent years they have been popularized through social media analysis and people have realized that they can be used for a lot of other interesting things like, but not limited to:

For us data scientists graph databases are an important tool that all of us should have at least some familiarity with. They are no silver bullet, but used right they can lead to simpler solutions in situations where traditional databases just won’t cut it.

Enough talk, let me walk you through an example in Neo4j, centered around historical and current members of the German national soccer team. I’ll leave it as an exercise to the interested reader to make the connection to possible applications to fraud detection or recommendation engines.

Neo4j provides a free community edition which works great and is well documented. It is very quick to set up, for testing and evaluation purposes all you have to do is download the latest release and run an executable. You can send queries to and inspect results from Neo4j in your web browser, easy as pie.

Getting The Data - Web Scraping

To get some data we have, like so often, to do some scraping. I’ve mentioned scrapy and beautifulsoup several times before. They are great tools by themselves and virtually unbeatable together. You can of course parse the DOM tree in pure scrapy (using CSS selectors or XPATH), which is fine for some simple applications, but I’d strongly recommend using beautifulsoup for entity extraction in any serious application. In practice, your parsing function will then start with something like this:

All you have to do is

the extracted entities as dictionary and write the result into a CSV file. You can then load the CSV into Neo4j as described in their documentation and start having some fun.

Rudi Völler, one of the most prominent past national players, will serve us as a worthy example. So, where did he play? Easy.

The cypher code above (Neo4j’s internal language is call cypher, but is in contrast to the name’s undertone quite easy to use) will give a result like shown below. 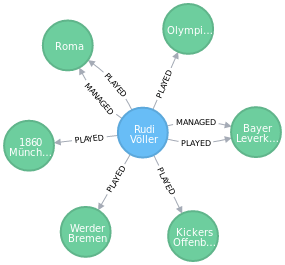 Now this is nothing you couldn’t easily do in SQL. Yes, in Neo4j’s web interface, you can play around with the blobs and arrows, but that’s more of a gimmick. So let’s get more creative. Which are the national players that managed teams that Mr. Völler played in or managed? 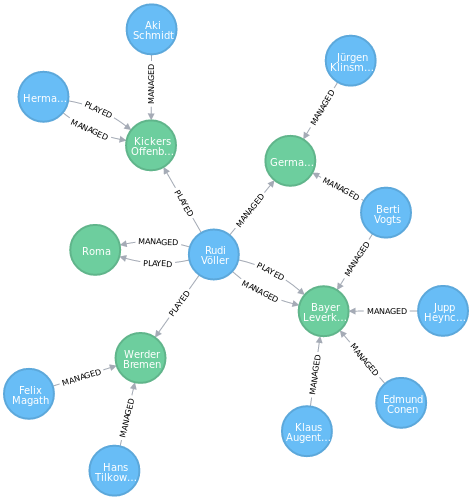 Voila. Since the human brain is so good at recognizing patterns (sometimes even if they’re not really there), some fraud analysts use tools like this to visualize suspected fraud rings. But what if you want to become more quantitative, asking questions like: Who played in the most clubs that Mr. Völler was either playing for or managing?

Pretty nice, with a syntax easy enough that I tend to require far less googling that with some SQL dialects when I work with cypher. Now go on your own data adventure and play around with Neo4j!